"Feadship OR the Gentleman Elegance"!..

Bright high quality example of the mid last century 1950-60's Yachting excellence, this Canoe Stern Yacht is a flagship by itself of what was yachting  golden age in the French riviera. Built in 1969 and fitted with 2 original Gardener Engines totally rehauled in 2012 together with the rest of this Yacht for an extensive refit at the Feadship yard in 2012, to grant this unit its a true Pedigree but adding what's needed of modern technology to do not compromise comfort and safety onboard.

With a capacity of eight guest accomodated in four state rooms, including a full beam Master ensuite with its own full head bathroom including a  large bathtub and a separate shower, a the most central and comforable lower deck area, another full beam VIP ensuite at the center aft of the yacht with its own bathroom and shower, as well as two central portboard and starboard doubles cabins which can be convereted in two twins sharing a central bathroom.

Surounded by a quiet and contemporary soft grey and walnut timeless interior, all guests will enjoy the truly unique cruising atmosphere at the fantastic economical speed of 10knots for a consumption of not more than 35 liters an hour, just as it was meant to be... 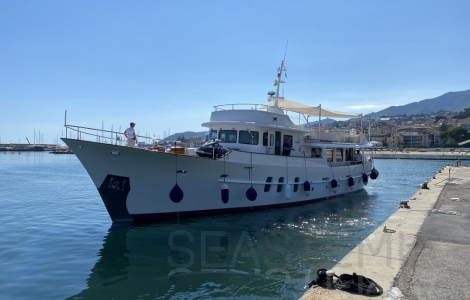